Another week, another round of improvements to Starship Builder! There are two significant new features in this week's build...

The most fun of the new features is a new type of weapon, the Ion Cannon! Ion Cannons are large, powerful energy weapons that deal great damage over time. Their disadvantage is that they consume very large amounts of ammunition and also can only fire directly forward. This means that it is much more difficult to target specific systems on an enemy ship, and they also may be less useful when built on larger, less maneuverable ships.

Here's a screenshot showing both the new Ion Cannons and the exposed substructure. Click on the image to get a better view of the substructure. 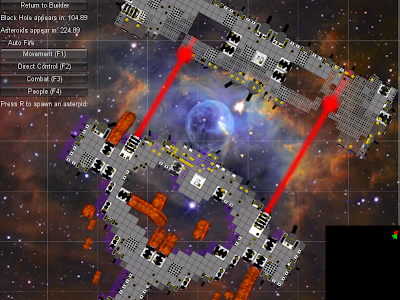 Download this latest build for PC and Mac.
Posted by Walt Destler at 1:55 PM No comments:

I've spent the past few weeks doing a massive overhaul of Starship Builder's code to support networked multiplayer. It's been a very long process, requiring a lot of code to be rewritten. But thankfully, and finally, everything seems to be working pretty much okay. Here's a glorious screenshot of two ships in the heat of combat, each belonging to a different player: 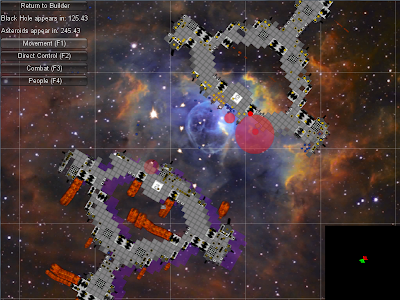 
If you want to play multiplayer yourself, here's some basic instructions for setting up a match:
Posted by Walt Destler at 1:05 PM No comments: