This is a big release, and it features a ton of little improvements along with two big, related features: a revamped "2.0" Bounty Hunter game mode, and F.T.L. Drives for ships.

For about the past year, the standard mode of play, "Bounty Hunter", has been pretty simplistic. You, the player, start with a single ship and destroy enemy ships in the immediate vicinity to earn money which can then be used to upgrade your own ship or purchase additional ships. As you destroy enemy ships, additional enemies spawn nearby, and as your own ship or fleet increases in power, the larger, more powerful enemies swill spawn as well.

This simple kill-reward-upgrade-repeat loop has been fine for testing and iterating on the core ship construction and combat gameplay mechanics, but it honestly wasn't very engaging for the player. Killing an endless stream of ships over-and-over again in the same location with little choice gets repetitive really fast.

Bounty Hunter 2.0, while not solving all of the issues of Bounty Hunter 1.0, seeks to create a much stronger foundation upon which further improvements can be built. Instead of playing in a single location with an unlimited supply of respawning enemies, the game is now played across a large galactic map: 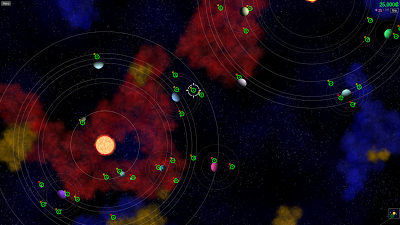 Each location in the galaxy map (the green icons) has only a handful of enemies, and they don't respawn as you destroy them. Instead, once the player destroys all of the enemies in a location, they must move on to another location. Each location has a small colored "shield" icon that indicates the strength of enemies present there: 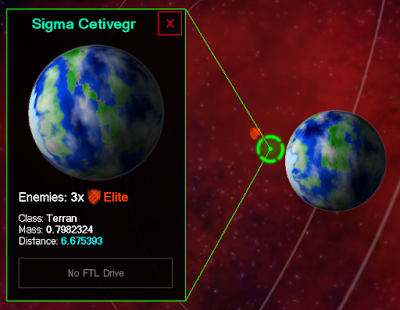 In Bounty Hunter 1.0, the game itself determined the difficulty of enemies that the player would face, which meant that for many players the enemies were either too easy or too difficult. This new system gives the player a degree of choice in what strengths of enemies they will face, and lets the player pace their own difficulty curve.

More importantly, this new galaxy map now provides a strong foundation on which more gameplay can be added. In the future, as the player explores the galaxy, they will encounter space stations to trade with, pirate bases, asteroids to mine, vessels in distress, and more. These features will be added to the game over time as they are developed.

The galaxy map itself is procedurally generated, usually with 4-6 solar systems full of planets and moons. Each location is "attached" to a nearby planet or moon, which then appears in the background during gameplay to give visual variety and a better sense of location. The planets, moons, and stars themselves are procedurally generated using Perlin Noise. Blue, red, and yellow nebulas also abound in the galaxies, which determine the color of the background during gameplay.

In order to move from location to location within the galaxy, the player must construct at least one F.T.L. (Faster Than Light) Drive on their ship. Once constructed, the FTL drive allows the player to perform jumps to other locations. 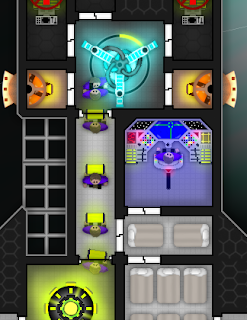 Jumping, however, is not free. F.T.L. Drives use a new kind of "fuel" resource. Like credits, fuel is earned from destroying enemy ships, and then it is spent to perform an F.T.L. jump. The amount of fuel spent is determined by the distance of the jump, the size of the ship(s) making the jump, and the efficiency of the ship's F.T.L. Drives.

Efficiency is a new concept in Cosmoteer that determines how much fuel is used when an F.T.L. jump is performed, and its gameplay purpose is to make the number and placement of F.T.L. Drives on a ship a strategically important decision. When adding an F.T.L. drive to a ship, the game displays a green/yellow/red overlay indicating which areas of the ship are close to an F.T.L. drive (green) compared to which areas are far from one (red). 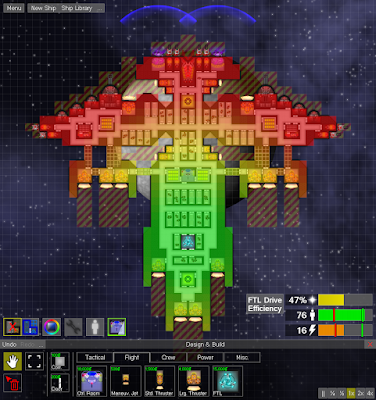 The farther (more red) areas greatly increase the amount of fuel need to perform an F.T.L. jump. And so to minimize the amount of fuel used, the player will want to place multiple F.T.L. drives around their ship in a variety of locations, making as much of the ship green as possible.

If the player ever runs out of F.T.L. fuel, they can purchase additional fuel for credits, but doing so is extremely expensive, and so it is almost always preferable to improve the efficiency of one's ship.

Because the amount of F.T.L. fuel earned from destroying enemies depends on the size of the enemy ship, as your own ship(s) grow in size, it becomes much less cost-effective to battle enemies that are smaller and weaker than yourself. (If you spend fuel to jump a very large ship to a location with small enemies, it is unlikely that you will earn enough fuel to recoup the fuel that you spent getting there.) My intent when balancing fuel costs vs rewards is that a ship with 75+% efficiency that fights ships its own size will generally break even on fuel.
Posted by Walt Destler at 1:09 PM 2 comments: