In Christopher Alexander's multi-volume essay, The Nature of Order, he identifies 15 properties found in almost all living structures and organisms in nature. They are: levels of scale; strong centers; boundaries; alternating repetition; positive space; good shape; local symmetries; deep interlock; contrast; gradients; roughness; echoes; the void; simplicity; and not-separateness. He also suggest that human-made objects, from cities to furniture to literature, also posses most if not all of these properties when they are well-designed. Few would argue that these principles cannot also be applied to the design of games.

So let's take a look at one of the most critically-acclaimed games of recent years: Portal. Portal is one of the very few games that nails every dimension of its design, from gameplay to visuals to audio to story. This makes it one of the very best examples to analyze with respect to the 15 properties.

1. Levels of Scale - The environments, entities, and challenges of a game should have a balanced range of sizes. 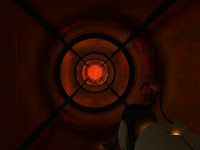 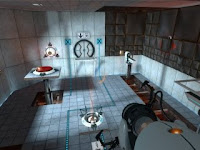 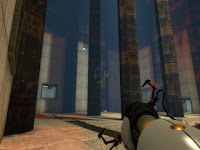 The various entities encountered throughout the game range from small robotic turrets to man-sized rocket launchers to a massive computer. The personalities of these also range from diminutive to ego-maniacal.

The challenges in the game range from simple puzzles to maddening brain twisters.

The actions taken by the player also very from small to huge. One moment the player may be simply stepping through a portal, and the next she may be diving from a hundred feet high into a portal to be flung across a cavern.

2. Strong Centers - The environments, entities, and challenges should have strong areas of focus or weight.

Many of the challenge rooms in Portal have, at their center, the key to solving the puzzle, such as an energy ball that needs to be redirected or a moving platform that must be activated. This focuses the player's attention on what, specifically, needs to be changed; otherwise the player might feel confused and aimless. 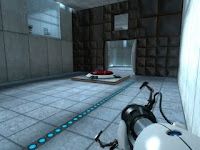 Each of the levels in the game, while typically having multiple small puzzles, generally have one primary puzzle that occupies the bulk of the player's attention. These primary puzzles often introduce new challenges or mechanics.

The story also has a very strong central character: GladDos, the computer A.I. and main nemesis. Although there are many tertiary elements (Aperture Science, Chell, the companion cube, the previous test subjects), the bulk of the story focuses on GladDos's manipulation and, eventually, attempted murder of the player's character.

3. Boundaries - Outlines should focus attention on the centers.

Portal makes a subtle use of outlines to hint at specific areas or objects, such as an ideal location to place a portal or the climactic end-boss. 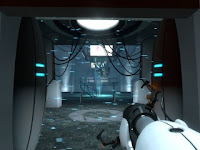 Like nearly all games played within an environment, Portal uses walls and impassible areas to keep the player focused on the current challenge. The barriers in the game (walls, doors, windows, pits of toxic ooze) are also a crucial element of the puzzles -- usually the player's goal is to find a way to circumvent a particular barrier.

4. Alternating Repetition - Elements within the environments and challenges should be repeated to give a sense of order and harmony. 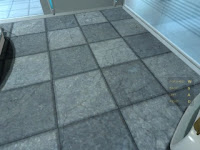 The types and scales of the challenges are also repeated throughout the game. Huge, acrobatic challenges typically come before and after smaller, more cerebral puzzles.

5. Positive Space - The backgrounds should reinforce rather than detract from the centers.

The visual backgrounds in Portal, which can typically be ignored by the player, never distract from the objects in the foreground, which the player must focus on to complete the challenge. 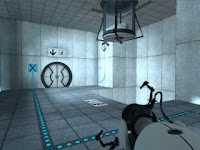 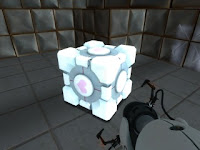 Nearly all of the environments and objects in Portal are indeed made of simple shapes. Rooms are typically just boxes, objects used to solve puzzles are simple cubes, and even GladDos, the most complex entity in the game, is made out of dozens of spheres.

Most of the environments in Portal are symmetric, and when they aren't, their asymmetry is used to call attention to a particular point. For example, in one level there is a large, highly-symmetric cavern with a large ledge running along one edge, from the leftmost corner to almost the rightmost corner. This break in symmetry -- a gap -- between the ledge and the rightmost corner draws the player's attention to the floor down below the gap. 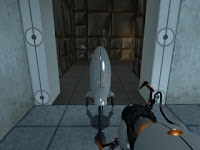 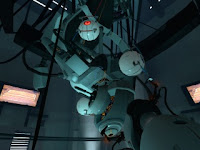 8. Deep interlock - The environmental, story, and challenge elements should be looping and interconnected to promote unity and grace.

I talk more about the interconnectedness of the game's elements in 15 Not-Separateness, but Portal's core gameplay mechanic deserves special attention.

There are few if any games in which the gameplay itself is so literally interconnected and looping. By placing portals in different areas, those areas become connected in a way they previously were not. And by placing portals such that the player can fall through them in a loop, the player can fling herself great distances, or simply fall forever, looping between the portals.

9. Contrast - Unity, focus, and emphasis can be achieved by using strong opposites.

Most noticeably, Portal uses contrast to differentiate surfaces on which portals can be applied (light-colored) from those on which they cannot (dark-colored). 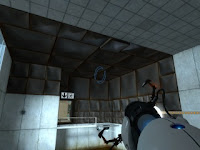 Contrast is also used to differentiate the sterile lab areas from the dirty, unkempt "behind-the-scenes" sections.

One of the reasons that GladDos is such a compelling nemesis is because her dialog often sharply contrasts itself. One moment she'll be congratulating you on a job well done and the next she'll be hinting at your impending demise. The internal contrast in her dialogue makes each line seem more congratulatory or more threatening than they otherwise would be.

10. Gradients - The proportional use of space and pattern in the environments, story, and challenges promotes harmony.

Like most games, Portal uses a difficulty gradient to keep the challenges matched appropriately with the player's skill level. Generally speaking, the complexity of the puzzles increases as the game progresses.

The hostility of GladDos also gradually increases as the player progresses through the story. While at the beginning a helpful guide, by the end she becomes an evil nemesis who must be destroyed at all costs.

11. Roughness - Texture and imperfection in the environment, entities, story, and challenges convey uniqueness and life.

While most of Portal is played in clean, smooth laboratory environments, there are places where roughness is used to great storytelling effect. Scattered throughout the game are small areas where the rough, unkempt reality breaks through into the lab space, providing clues about the world outside and foreshadowing the end of the game. Near the end of the game, Portal shifts almost completely to rough environments, at exactly the same time as when the player finally breaks free from GladDos's directives. 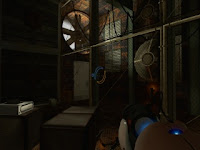 12. Echoes - Similarities should repeat throughout the environment, story, and challenges.

Portal is full of moments that echo earlier moments.

In the gameplay, there are simple puzzles and elements of puzzles (such as crossing a divide or flinging across a cavern) that are seen again later in the game. Most of the puzzles are repeated again in some form in the final level. The helps give the player a sense of confidence and the feeling that she has improved her skills, since these puzzles are now very easy to solve.

13. The Void - Empty spaces and pauses in challenge create calm and contrast.

Portal uses the void to great effect. Large open spaces and rooms help focus attention on the few important objects within them. And the final battle with GladDos takes place within a huge room that is itself in a massive, detail-less cavern. Through windows the player can see this room within the cavern, and she knows that whatever is in that room is the center of everything. 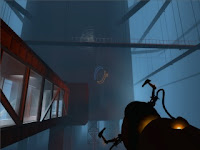 Portal also uses pauses in challenge before and after particularly intense puzzles to let the player recuperate from the previous challenge or prepare for the next. The pauses also help to create a contrast, such that the next challenge seems greater than it would be if there were no pause. For example, the challenge before the final fight with GladDos is one of the most intense of the game, and fighting GladDos directly afterward may feel a little anticlimactic. But instead there are several long hallways before the final fight, which give the player the chance to recuperate and by contrast makes the final fight seem even bigger.

14. Simplicity - Use only essentials and avoid extraneous elements.

In a time where modern games are increasingly complex, Portal stands out as remarkably simple.

From a visual standpoint, the environments have in them only that which is absolutely necessary to guide the player and to tell the story. The rooms are barren, and the walls, ceilings, and floors are simple patterns of light and dark tiles. There is nothing extraneous.

The gameplay itself is also very simple at its core. It simply asks the question, what could you do if you could create two interconnecting portals on flat surfaces? The other gameplay mechanics (crossing divides, flinging, sending objects through portals) are all answers to that question -- they arise elegantly from the core mechanic.

15. Not-Separateness - All of the elements in the game should be connected and complementary.

Many games have stories and environments that do not support their challenges, but Portal is not one of those games. Most of the time playing Portal is spent teaching the player all the various emergent properties of the portal mechanic, which works perfectly with the game's story in which the player is essentially a human rat in a giant lab. The necessary gameplay instructions given the player by the GladDos don't break the story because it is plausible that she would give the character those instructions even if Portal wasn't a game.

The environments also support both the story and the gameplay. The sparse rooms reflect the sterility of a laboratory while also keeping the player's attention focused on the objects that matter.
Posted by Walt D at 7:02 PM