I spent my free time during the past week or so working on an experimental prototype for a new gameplay mechanic.

RGB is an experimental prototype of a 1st-person puzzle game. The core game mechanic is based on the idea that "if you can't see it, it doesn't exist", such that if your line of sight to an object is obscured, then the obscured object will no longer exist. There's also the added twist whereby many objects only exist in one or two color dimensions, and those objects will only obscure other objects of the same color. For example, a red object will only obscure other red objects, while a yellow object (a mix between red and green) will obscure red, green, and yellow objects.

Puzzles consist of finding proper vantage points, pressing buttons to change the colors of objects, and moving blocks around. The puzzles are physics-driven, but physics is only a supporting element to the real challenge of mixing colors.

You can download PC and Mac versions of the prototype. 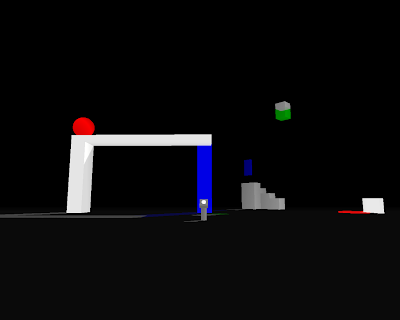