Today I released version 0.4.0 of StarWright. The big feature of this release is a new weapon: the Small Laser Blaster!

The Small Laser Blaster is an energy weapon that fires pulses of raw energy. Unlike the cannons, the laser blaster draws its power from plasma batteries instead of using ammo that has to be manufactured elsewhere. Compared to the cannons, the laser blaster deals less damage but has a higher rate of fire and is considerably more accurate. Its rounds also cannot penetrate inside enemy ships, unlike the cannons, making it more effective at destroying perimeter systems than interior systems.

Related to the addition of laser blasters, the player now starts with a new class of ship, which I dubbed the Model-1. The Model-1 is a bit smaller than the previous starting-ship, and instead of having two Regular Cannons it has two Small Laser Blasters. I made this change to reduce the number of game mechanics that the player has to learn and understand at the beginning of the game; laser blasters use no ammo, and so the player only has to understand the power mechanic instead of both the power and ammo mechanics. Also, because laser blasters are more accurate than the cannons, new players will be frustrated less by missed shots. 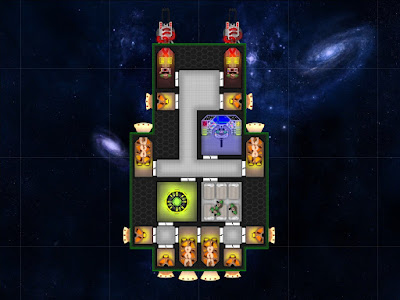 I have also made some major balance & pacing adjustments in this release. First of all, the damage dealt by all weapons has been greatly increased (cannons do more than twice as much damage); a change I made to increase the pace of combat, which I felt was feeling sluggish. Also, the thrusters and the Ammo Factory both use power much more rapidly, which, combined with the power-consuming new laser blasters, makes balancing power usage and providing sufficient reactors & power supplies much more important.

Go ahead and download it now! I welcome all of your feedback!
Posted by Walt Destler at 12:53 PM