The original Starship Builder prototype suffered from some terrible user interface choices. It's not that they were stupid, but that they were a product of tacking on lots of features and not being sure about how I wanted the game to play. Now that I have a better sense of what the game will be, I can greatly improve the user interface.

This past week I've been working on the in-game controls for commanding ships. Since I see no need to reinvent the wheel, I've modeled the controls after typical real-time strategy games like StarCraft and, especially, Company of Heroes. Like most RTS games, you can left-click on a ship you own to select it, or drag a box around several ships to select all of them. When you have ships selected, you can right-click somewhere in empty space to order your ships to move there. I've stolen a feature from Company of Heroes, whereby if you right-click and drag you can easily reorient which way your ships are pointing. 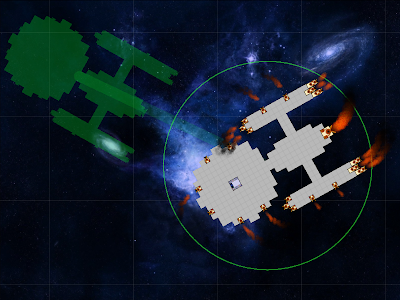