Well, I'm starting over from scratch.

For a while now I've been working on a game prototype called Starship Builder. In short, it's a "build-your-own starship simulator" in which players design their own starships by placing rooms and parts onto a grid. Players can challenge other players in multiplayer matches to see who can design the best starship. Eventually, players will be able to explore galaxies with the starships that they create. You can read more about the game on my website.

I think that the existing prototype shows a lot of promise (usually when I show it to fellow gamers, the response I get is, "When can I buy this?"). But as high as its cool-factor is, the prototype as it exists right now is deeply flawed, both in terms of design (the user interface is very confusing and too detail-oriented) and programming (the game is being held back by choice of game engine).

So I'm starting over. For now, I'm calling this new version StarWright.

Beginning again from the ground will help me hit reset on the game's design. I will take what I learned from the prototype (the premise is fun and interesting, but the U.I. is terrible, micromanagement is tedious, and player-control of multiple ships is desirable) and build a much more fun game that is much easier to play.

But probably more importantly, starting over afresh will let me correct some major technical issues with the current prototype, most of which stem from the use of the Unity3D game engine. While Unity was I think a good choice for proving out the basic concepts of the game, it has proven to be unable to scale up to the complexity that the game demands. Unity requires that ever piece of code be attached to a game object, and it does not provide control over the main game loop or the precise order in which objects are updated or rendered. Working around those limitations was cumbersome, inefficient, and a lot of work. By switching to my own game engine (dubbed Halfling, it was originally created to power my games Tetrik and Tanky-Tank), I now have full control over the game's code, which will allow me to make a more sophisticated and much more optimized game.

I'm just getting started, but here's a sneak peak at the new ship designer interface: 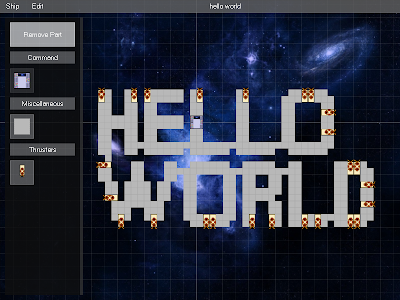 There's not much to the game yet -- only three parts you can use, and no way to test your ship, fly around, or fight other ships. But I have high hopes for this new version. Throwing off the shackles of the old design and game engine already feels like breathing in a cool breeze atop a mountain. It's liberating.

Now that I'm taking the project more seriously and hope to sell a finished game one day, I probably won't be posting regular playable builds of the game -- just screenshots and maybe an occasional video. That will also save me the hassle of having to make a new build for every blog post I make!
Posted by Walt Destler at 10:06 AM