This is just a quick update to show off a refinement I made to the sandbox user interface.

My refinement is to eliminate those two distinct modes and instead display the toolboxes for ship parts and asteroids on the screen at all times by default. (They can be hidden by clicking the X and re-shown from the Panels menu.) Ordinarily, if you have no part or asteroid selected, then you can select and command ships like normal. If you want to modify a ship, simply select your desired part on the left and add it to your ship. Likewise if you want to have fun with an asteroid, select it from the toolbox on the right. Once you're done either building ships or placing asteroids, simply right-click to get rid of whatever you had selected and you'll be able to command your ships again, just like normal. 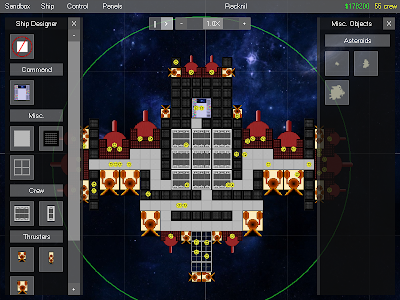 The elimination of the two distinct modes is definitely less annoying and more intuitive too. The few people who I've had playtest the game seem to agree. My only real lament now is that the presence of both toolboxes on the left and right can crowd the screen. It's not too bad on large monitors, and you can hide either or both of them if you want, so it's not a big deal, but I still wish the user interface was less crowded.

I also recently made another important refinement to the sandbox, which is the elimination of "ship grids". Previously, in order to build a new ship, you first had to place an empty "grid" into space, and only then could you put parts and rooms on the grid. In this latest version I streamline the process by allowing you to place a part directly into empty space, without requiring a grid first. To further extend your new ship, simply select a new part and when the mouse cursor is near the ship, the selected part will snap into position.
Posted by Walt Destler at 3:16 PM